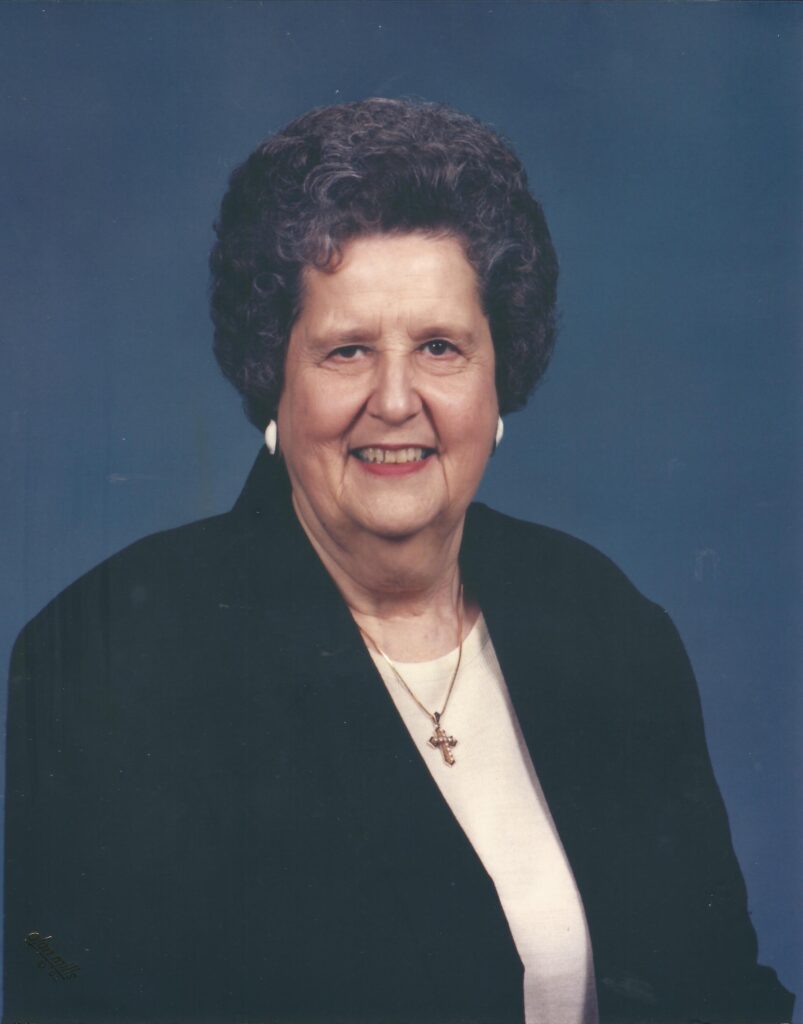 Funeral services for Cathryn Teasley Brown will be at 2:00 pm Monday, January 23, 2023 at Glen Allan United Methodist Church. She died Friday, January 20, 2023 at St. Catherine’s Village in Madison. Burial will be in County Line Cemetery.

Cathryn Teasley Brown was born August 13, 1926, in West Point, Mississippi to Frank Norman and Lula Wells Teasley. She attended West Point High School and later Delta State College where she was on the Dean’s List and was voted Freshman Class Treasurer. Cathryn left college early to marry Sam Jones Brown on February 10, 1946, in West Point after he returned from the battlefields of Europe in World War II, serving from 1941 to 1945. Sam and Cathryn started a family in 1947 with their son Milton and daughter Carol Ann in 1948. After her children were in grade school, Cathryn decided to finish her studies, returning to Delta State, graduating in 1961 with a degree in Mathematics Education. During their marriage, they lived in Glen Allan, West Point, Greenville, Vicksburg, and finally built a house between Chatham and Glen Allan on Lake Washington in 1969 where she lived for more than 40 years. She taught secondary math at Glen Allan High School, Riverside High School, Washington School in Greenville, Sharkey Issaquena Academy in Rolling Fork, and Deer Creek Academy in Arcola. Cathryn taught for over 30 years touching thousands of lives around the Delta taking great care and loving interest in the success of her students. She was an active member of Delta Kappa Gamma, a professional honor society for women educators, where she looked forward to spending time with fellow educators.
Outside her professional life, Cathryn was a member of Glen Allan Methodist Church for many years teaching Sunday School and participating in UMW. She served on the revitalization committee for County Line Cemetery where she will be buried. Cathryn was a spiritual person from a very young age studying scripture regularly finding comfort and guidance in the word of God and her savior Jesus Christ. Her favorite scripture is John 11:25-26, Jesus said to her, “I am the resurrection and the life. The one who believes in me will live, even though they die; and whoever lives by believing in me will never die. Do you believe this?”

She moved from her home on Lake Washington to St. Catherine’s Village in Madison in 2016 where she met many old and new friends and enjoyed playing bridge and bingo. The last years in Madison were a blessing being close to family and able to see children, grandchildren and great-grandchildren while living among friends of her generation, the Greatest Generation.
Although we relinquish her body to the Earth, and her soul to God, memories of her will live with those she loved until their own dying day.

There will be a visitation one hour prior to services at the church. In lieu of flowers, please donate to the United Methodist Church, P.O. Box 393, Glen Allan, MS 38744.