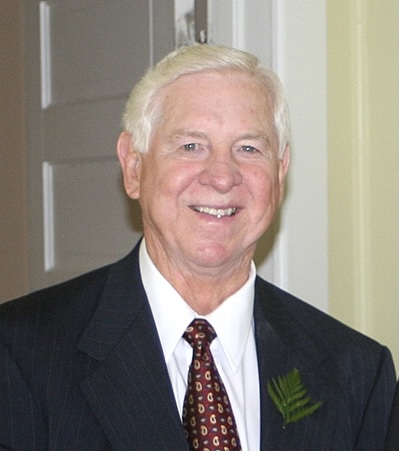 Gene was born on September 25, 1935 in Indianola. He graduated from Indianola High School in 1953 and received his Bachelor of Business Administration from the University of Mississippi in 1960. While at Ole Miss, Gene was a member of Phi Delta Theta Fraternity. He played for the Ole Miss Golf Team and was the first Ole Miss golfer to be initiated into the university’s M-Club. Following his sophomore year, he served two years in the Army with the 38th AAA Missile Battalion in Princess Anne, VA. Upon completion of his service, he returned to Ole Miss and finished his degree.

Gene began his insurance career as an adjuster for Crawford & Company Insurance in Richmond, VA. It was there where he met and courted Joyce Tredway. Following their 1962 wedding, they moved to Memphis, TN, where Gene worked with Treadwell & Harry Insurance Agency. In 1964, they returned to his beloved Indianola when he joined his father in the family business and earned his distinctions of Certified Insurance Counselor (CIC) and Accredited Advisor in Insurance (AAI). In his 45 years as President of Van Cleve Insurance Agency, Inc., he proudly served his industry in many capacities on the local, state, and national levels. In 1991, he represented Mississippi by serving on the first USF&G Agency Advisory Council. He was the 1992-1993 Chairman of the Independent Insurance Agents of Mississippi and a past president of the Yazoo Delta Local Agents Association. He provided guidance and knowledge to insurance students at Ole Miss by serving as Co-Chairman of the university’s Insurance Advisory Committee.

Gene’s love of community was displayed in all of the capacities where he served his hometown. He was past commissioner of Indianola Boys’ Baseball Association, past president of both the Indianola Chamber of Commerce and the Sunflower County Ole Miss Alumni Association. Gene’s membership in the Indianola Rotary Club, where he served as a past president and was a Paul Harris Fellow, spanned decades. He took great pride in serving on the Planters Bank & Trust Advisory Board.

Gene was a cradle Episcopalian and dedicated his life to serving his family’s precious St. Stephen’s. Through most of his 86 years as a communicant, he could be found in the roles (sometimes multiple times) of Senior Warden, Junior Warden, Vestry member, Stewardship Chairman, Pancake Supper Chairman, and Layreader.

Gene’s passions included his yard work, his golf game, and all things Ole Miss. He lived his life loving his God and country, his family and community. He was a kind and selfless man, a good and faithful servant who will be missed by all of those fortunate enough to have known him.

Memorials may be made to St. Stephen’s Episcopal Church, P. O. Box 1004, Indianola, MS; The American Cancer Society; or a charity of the donor’s choice.